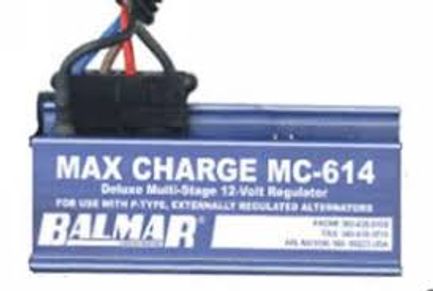 Most marine inboard engines have an automotive type alternator with a built in regulator.  These regulators are fitted because they are very cheap to produce and will perform quite adequately and reliably for many years.  However, such regulators are quite unsuitable for recharging deeply discharged house batteries, as the automotive regulator will quickly reduce output to a fraction of the alternator’s capacity and the motor will have to be run for extended periods to recharge a depleted house battery.

This problem can be overcome by fitting a larger alternator or adding a smart three stage external regulator to the existing alternator.  These regulators are stand-alone electronic units mounted away from the alternator and engine.  The advantage these regulators hold over the standard internal regulators found on alternators is that they will drive the alternator as hard as possible to achieve full charging in the shortest possible recharge time.  This means that the batteries will be recharged to the greatest possible degree whilst motoring.  Alternatively, if the engine is being run solely to recharge the batteries, this run time is limited to a minimum, saving fuel and engine servicing costs.  A fuller charge than is usual where standard alternator regulators are fitted will be achieved, which will extend battery life.

The external regulators will drive the alternators to charge in a three-stage pattern, which is why they are called “Smart” regulators.

Whilst the set charging voltage has now been attained on the surfaces of the battery plates, it takes time for the charge to be fully absorbed deep into the structure of the battery.  In order to do so, a constant voltage is maintained during the second stage of the charging process, either at the Bulk voltage or just below it.   During this stage the current will gradually diminish to a set point.   A minimum and/or maximum time may also be specified for this stage.   The second stage is called the Absorption Stage or Constant Voltage Stage.

Once the current absorption falls below the set value or the set absorption time has been achieved, the regulator switches to the third stage.  The voltage is typically dropped to between 13V and 13,6V.  At this voltage, little or no further charging takes place.  The battery is maintained in its fully charged state and light loads placed on the system are effectively fed from the alternator.  The third stage is called the Float Stage.

External regulators are offered by companies such as Ample Power, Balmar, Mastervolt and Sterling.  Whilst they essentially all perform the functions detailed above, there are differences in execution and sophistication.  Some have pre set programs for a selection of battery types.  Others require individual parameters such as Bulk, Absorption and Float voltages and absorption time to be programmed.

Charging from two alternators to one battery bank can add complication.  There are modules available to make this possible such as the Ample Power Dual Alternator Controller or the Balmar Centerfielder.

Beware that fitting a Smart External Regulator will severely add to the loading of the alternator.  It can lead to alternator drive belt slippage.  Larger pulleys and/or additional belts may be required.  Replacing the standard alternator cooling fan with high performance fans if possible is recommended to prevent overheating.

Fitting a smart external alternator regulator will cost at least about $500.00 and it can be much more. But battery recharge times can be reduced to less than half, and the saving in fuel, servicing and battery costs over the years, in addition to the fact that a much longer lifespan can be expected from the batteries will almost definitely make the exercise worthwhile.